Rep. Rashida Tlaib, D-Mich. jumped to the defense of fellow freshman Democrat Ilhan Omar who is facing major backlash after a speech at a Muslim rights group’s event in which she described the September 11, 2001, terror attacks that left nearly 3,000 Americans dead as “some people did something”.

The comment has drawn ire from the likes of Rep. Dan Crenshaw, R-Tx, and the New York Post, which published a dramatic front page Thursday with an infamous photo of New York City’s Twin Towers on fire on the day of the attacks, Fox News reports.

The page read: “Here’s your something: 2,977 people dead by terrorism.” 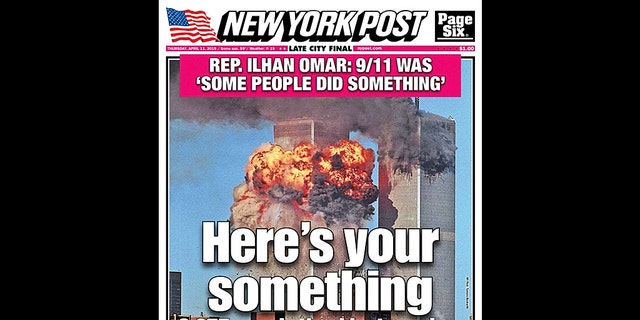 Tlaib, when asked by MSNBC if Omar should have rethought her words, said that she had been taken out of context.

“They do that all the time, especially women of color, they take our words out of context because they’re afraid because we speak truth, we speak truth to power,” Tlaib said.

“My sister Ilhan Omar, what she was talking about, was uplifting people by supporting their civil liberties and civil rights,” Tlaib said. “She has always, always condemned any strategy, especially of a person directly impacted by being a refugee herself.”

Omar spoke at a Council on American-Islamic Relations (CAIR) fundraiser last month, where she called upon other Muslim Americans to “make people uncomfortable” and to “raise hell” with their activism and presence in the society and criticized the Jewish state.

Omar and Tlaib became America’s first Muslim congresswomen when sworn into office in January. Their time in office has been embroiled in allegations of anti-Semitism, DCNF reported.

Tlaib invited a pro-Hezbollah, anti-Israel activist to her swearing-in ceremony and the following private dinner in January. Days later, an op-ed column she wrote in 2006 for Final Call, a Nation of Islam publication Louis Farrakhan founded, surfaced. She also has come under scrutiny for having ties to other anti-Israel individuals and for questioning the loyalty of Republican lawmakers who support the Jewish nation-state.

Omar has defended anti-Israeli statements, such as ones invoking Allah to expose Israel’s “evil doings,” and she is on record stating that Israel is not a democracy. She gave an interview to a host that referred to Israel as the “Jewish ISIS” and mocked how Americans speak about al-Qaeda and Hezbollah. Omar has also faced criticism from both sides of the aisle for promoting ages’ old anti-Semitic canards such as that Jews are support of Israel is paid for and that they have a dual loyalty to the U.S. and Israel

Omar and Tlaib both revealed in February that they would be fundraising with CAIR in the coming weeks; CAIR is a notable pro-Palestinian organization with ties to Islamic terror groups. The U.S. Department of Justice listed CAIR as an unindicted co-conspirator in funding millions of dollars to the terrorist organization Hamas. Additionally, the United Arab Emirates (UAE) named CAIR a terrorist organization along with al-Qaeda and the Islamic State in 2014.

“Taking it out of context, this is just pure racist act by many of those, hateful acts, by those because she does speak truth, when it talks about different issues that they don’t disagree with,” Tlaib said. “I’m really outraged.”

Well there are millions of us who are outraged as well so take a hike.

We’ve been infiltrated, no two ways about it.