Opinion| ICYMI| Chelsea, who’s main accomplishment in life (as far as I can tell) was being born a member of the Clinton crime family, has done quite well for herself.

The Hill reported on just how well Chelsea has done being the daughter of the Clintons:

‘Chelsea Clinton has reaped $9 million in compensation since 2011 for serving on the board of an internet investment company, according to Barron’s, the financial publication.

She reported owning $8.95 million worth of IAC stock to the Securities and Exchange Commission at the end of December.

It sure sounds like this was a profitable deal for all involved. Now, all we can do is speculate, but I am going to go out on a limb here and suggest that IAC did not just hand Chelsea $9 million in stock, she must have been adding some sort of ‘value.’ After all, their stock is soaring through the roof. Now, I wonder what that value could have been … her parents’ political influence? It sounds plausible, does it not?

The Hill goes on to explain:

Clinton was named to the board of Expedia Group in March of 2017, a position that typically earned $250,000 in 2015, according to a report at the time by The Guardian.

Both IAC and Expedia are controlled by Barry Diller, the business and television mogul, who is a friend of Hillary Clinton.

Anyway, Chelsea decided to attack President Trump on Twitter over his handling of the Coronavirus. I’m still wondering Chelsea is an expert on outbreaks …

President Trump has left the U.S. dangerously underprepared to face a public health crisis like a #coronavirus outbreak. @devisridhar and I explain how via @CNN https://t.co/gohxobjXOv

Doug Ross pointed out what is perhaps the largest flaw in her false bravado:

Ain't it ironic that the open borders kooks are now lecturing us on Coronavirus? 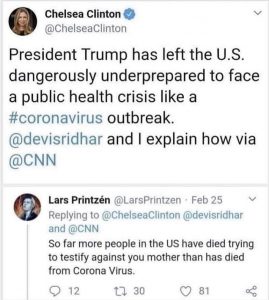 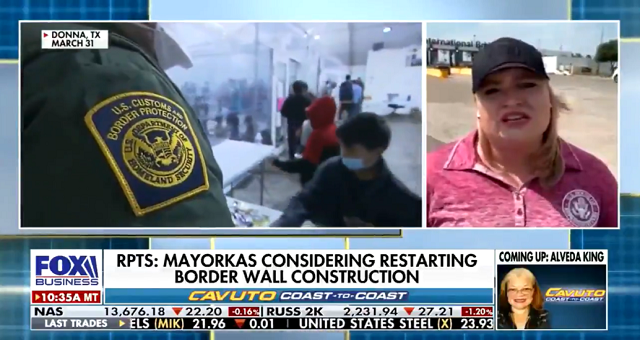