OPINION by: Leisa Audette at 100 Percent FED Up

Attorney General Bill Barr just called the media a “collection of liars in an exclusive interview with Townhall. AG Barr has seen it all and knows that the media is extremely biased when it comes to President Trump. One of the most recent interviews AG Barr had with CNN’s Wolf Blitzer about mail-in voting was very contentious (see below).

In the transcript below from Townhall, AG Barr calls out the media for their lack of coverage of the “orchestrated violence” by radicals. He also said that the media has been lying to Americans about what’s really going on with the riots. The truth is that any video on the ground has come from brave social media journalists on the ground. By ignoring the violence, our media is exposing themselves as an arm of the Democrats.

“They were lying to the American people.” – AG Barr

“They’re basically a collection of liars. Most of the mainstream media. They’re a collection of liars and they know exactly what they’re doing. A perfect example of that were the riots. Right on the street it was clear as day what was going on, anyone observing it, reporters observing it, it could not have escaped their attention that this was orchestrated violence by a hardened group of street fighting radicals and they kept on excluding from their coverage all the video of this and reporting otherwise and they were doing that for partisan reasons, and they were lying to the American people. It wasn’t until they were caught red-handed after essentially weeks of this lie that they even started feeling less timid.”

The second part of AG Barr’s interview discusses the seriousness of the biased media who, according to AG Barr, have become “political actors” trying to “achieve a political purpose. AG Barr is saying that by being so one-sided that not telling the truth, the media is harming our Republic:

“The press has dropped, in my view…and I’m talking about the national mainstream media…has dropped any pretense of professional objectivity and are political actors, highly partisan who try to shape what they’re reporting to achieve a political purpose and support a political narrative that has nothing to do with the truth. They’re very mendacious about it. It’s very destructive to our Republic; it’s very destructive to the Democratic system to have that, especially being so monolithic. It’s contributing to a lot of the intensity and partisanship.”

Blitzer and Barr clashed several times on the topic — which has become a regular sticking point as the United States rapidly approaches the first general election since the coronavirus pandemic struck — during a segment of “The Situation Room.”

????????????A must watch video about the insanity of universal mail in ballots. AG Barr destroys CNN!pic.twitter.com/xudtEvHFmD

Blitzer began by quoting President Donald Trump, saying that he had appeared to encourage North Carolina residents to vote twice — once by mail and once in person — and then let the system sort things out.

“Well, I don’t know exactly what he was saying,” Barr replied. “But it seems to me what he’s saying is he’s trying to make the point that the ability to monitor this system is not good and if it was so good, if you tried to vote a second time, you would be caught if you voted in-person.”

Blitzer pushed back, saying that it was illegal to vote twice. “Is there any state that says you can vote twice?”

“There are some that maybe you can change your vote up to a particular term, I don’t know what the law is, so I’m not going to offer —” Barr said as Blitzer continued to talk over him.

AG Barr calls mass mail in voting “reckless and dangerous” in an election that people need to have confidence in the results of.

Maybe that’s the strategy.. They want confusion after the election and they’ll flip the script and say Trump rigged it.

“Why are you asking me what he was saying?” Barr asked.

Blitzer replied that President Trump didn’t “believe in the mail-in voting” and had said it would be rife with fraud if it were rapidly expanded to accommodate the 2020 general election.

“Wolf, this is sort of cheap talk to get around the fundamental problem, which is the bipartisan commission chaired by Jimmy Carter and James Baker said back in 2009 that mail-in voting is fraught with the risk of fraud and coercion. Let me talk,” Barr said as Blitzer began to interrupt.

Barr went on to say that widespread mail-in voting had always been panned as an opportunity for fraud and coercion, adding, “The only time the narrative changed is after this administration came in … Do you think that’s a way to run a vote?”

President Trump clarified his remarks in a Thursday tweet, saying that he meant for people to go on Election Day to verify that their mail-in ballot had been accepted and counted, and if it hadn’t, they should vote in person.

Based on the massive number of Unsolicited & Solicited Ballots that will be sent to potential Voters for the upcoming 2020 Election, & in order for you to MAKE SURE YOUR VOTE COUNTS & IS COUNTED, SIGN & MAIL IN your Ballot as EARLY as possible. On Election Day, or Early Voting,.. 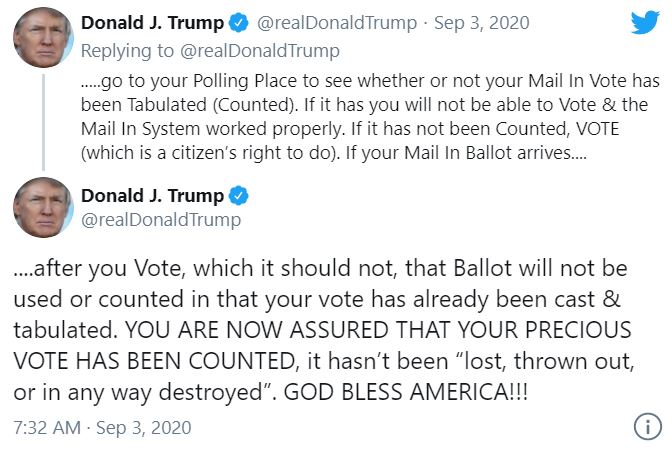